As part of the 2017 tax overhaul, the state and local tax (SALT) deduction was capped at $10,000 per year on Federal Schedule A for taxpayers who itemize. Since the time tax reform was enacted, New York, New Jersey and Connecticut have been fighting this cap. (See related blog.)

Politicians in these states have been leading campaigns to eliminate the provision with subsequent legislation, as well as making an effort to find a legal workaround that would ease some of the pain of the SALT cap. They fear that failing to do so will accelerate efforts by high-earning residents to move to lower-tax states.

The Treasury Department dealt the final blow on these efforts on June 11, 2019, when it issued regulations that prohibit programs in high-tax states that would allow filers to work around the law. The reason? Treasury indicated that such programs allow taxpayers to claim too many tax breaks.

States including Connecticut and New York have passed laws allowing residents to donate to a state-created charitable fund, and to be able to use all or a portion of that “donation” as a credit against the resident’s property taxes. They would then, in theory, be able to deduct the donation as a charitable gift on their federal taxes, while then using the credit against their property taxes.  Treasury’s new regulations ended these programs by emphasizing that the amount of the charitable deduction allowed can only be in excess of anything received for said deduction; e.g., the amount donated above and beyond whatever credit was received.

If a taxpayer uses the charitable fund, it may cause their federal taxes to increase. That’s because the amount of the deduction used as a credit on state taxes is not deductible. Additionally, since the taxpayer wouldn’t pay state taxes, there’s no tax deduction, either.  As such, if use of the fund causes a taxpayer’s actual tax payments in a calendar year to be less than $10,000, they will have a lower federal itemized deduction, and as such could pay more federal taxes.

New York and Connecticut have provided options to certain taxpayers that Treasury did not address. Connecticut allows owners of pass-through businesses (partnerships, limited liability companies, S corporations) to treat Connecticut business income taxes as a business expense (which the 2017 tax overhaul did not limit), and then gives taxpayers a credit of most of the business tax paid on their Connecticut personal return. IRS officials have indicated that they may issue guidance to invalidate Connecticut’s plan, which may cause taxpayers to pay more tax to Connecticut than they would have in the first place.

New York has passed a law that allows companies to pay an optional payroll tax, where their employees can then receive a credit on their New York state income taxes. The optional tax is paid on wages to each employee that exceeds $40,000 per year, and will cap at 5% in 2021. Nonresident employees may have trouble getting full credit for these taxes paid, as any credit allowed by a different state may not apply since the employee didn’t directly pay the tax.

Skoda Minotti will continue to keep you informed on additional Treasury regulations and state efforts to mitigate the federal limitation of state and local taxes. Need more information? Contact Josh Stein at 330-576-1845 or jstein@skodaminotti.com. 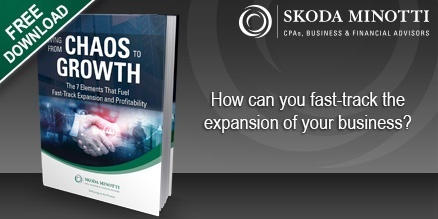