There is great news for certain construction company contractors in the tax reform package. The 2017 Tax Cuts and Jobs Act, enacted in December, increases the gross receipts limit to qualify for the small construction contract exception to the percentage of completion method (PCM) by $15 million.

While taxpayers must use either the cash or accrual accounting method for short-term contracts, they must account for long-term contracts using the rules under Code Sec. 460 (e). For long-term contracts, taxable income is generally determined using either the PCM or the completed-contract method. Under the PCM method, taxpayers must include in gross income for the tax year an amount equal to the product of the gross contract price, and the percentage of the contract completed during the year.

Before the tax reform package was enacted, construction companies with average gross receipts of $10 million or less in the preceding three years were entitled to an exception from the requirement to use the PCM method for long-term contracts as long as they met certain  requirements. They were allowed to instead deduct costs associated with construction when they were paid and to recognize income when the building was completed.

The Tax Cuts and Jobs Act increased the amount of gross receipts from $10 million or less to $25 million or less. For contracts entered into after Dec. 31, 2017, the exception for small construction contracts from the requirement to use the PCM is expanded to apply to contracts for the construction or improvement of real property if the contract: 1) is expected (at the time such contract is entered into) to be completed within two years of commencement of the contract, and 2) is performed by a taxpayer that (for the tax year in which the contract was entered into) meets the $25 million gross receipts test.

Use of this PCM exception for small construction contracts is applied on a cutoff basis for all similarly classified contracts. That means there is no adjustment under Code Sec. 481 (a) for contracts entered into before Jan. 1, 2018.

Alternative minimum tax (AMT) still requires the use of PCM on all long-term contracts, so there will still be an AMT adjustment required for any contract accounted for using the completed contract method. However, the AMT thresholds have increased significantly under the Tax Cuts and Jobs Act, causing fewer taxpayers to be subject to the AMT.

If you have any questions regarding the tax accounting for long-term contracts please reach out to Marie Lenarduzzi or Shaun Zalewski at 440-449-6800. 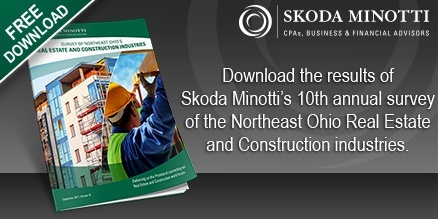 ← What Does the Tax Cuts and Jobs Act Mean for the Real Estate and Construction Industry?