When a boxing match “goes the distance” (all rounds concluded with neither fighter being knocked out), to many viewers it is a complete mystery as to which fighter’s arm will be raised in triumph after the judges’ scorecards are released. Similarly, the scores issued by judges during Olympic diving or gymnastics events can be equally enigmatic to the untrained eye.  How do the judges reach these results?  How are the scores determined?  What methods or factors do judges even take into account?

In the world of business valuation, understanding the results of a valuation report can also be a challenge for many individuals.  Questions often arise such as:

Whether you are valuing an entire business enterprise, real or personal property, intangible assets (such as during a purchase price allocation), options or other derivative securities, etc., there are three general approaches to determining value: (i) income approach; (ii) market approach; and (iii) asset (or cost) approach. Each approach contains different methodologies based on varying factors. It is the role of the valuation analyst to determine which of these valuation methodologies to consider, apply and ultimately rely upon to reach a concluded value.

The following summarizes each of the general approaches as well as the most common valuation methodologies associated with each approach used specifically in business valuation.

Valuation methodologies under the market approach calculate value based on the prices paid for ownership interests in companies similar to the subject company. In business valuation, there are two principal methods used in the market approach, as follows:

A working knowledge of the common valuation methodologies applied during the course of a business valuation can prove vital in understanding the context and reasonableness of the conclusions within a valuation report, almost as if you were granted a sneak peek into the scorecard of a boxing judge before the bout’s winner is announced.

Do you have questions about valuation methodologies, or other valuation issues? Please contact Derek Oster, CVA, at 855-Marcum1 or derek.oster@marcumllp.com. 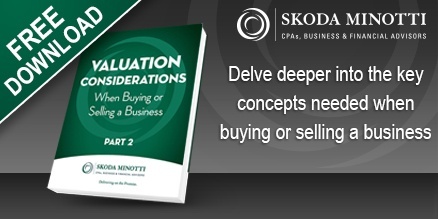 ← Understanding the Requirements for Form 1099-MISC

Positioning Your Business for Longevity

How to Deter Employee Fraud and Protect Your Company