Since fiascos like the Enron scandal in the early part of the 21st century, the Financial Accounting Standards Board (FASB) has placed great emphasis on related entities, called Variable Interest Entities (VIEs). The emphasis on this was, in part, to ensure that entities with obligations arising from transactions and relationships with entities under common control (i.e., VIEs) to which a company retained economic exposure were properly accounted for in the reporting entity’s financial statements.

To that end, in 2002 the FASB issued an interpretation of the consolidation standard in the form of what was then known as “FIN 46” (revised as “FIN 46(R) in 2003), later codified under the Consolidation standards under FASB Codification ASC 810, Consolidation. Under ASC 810, reporting entities with relationships with other entities under common control are often required to consolidate their financial statements for financial reporting purposes under U.S. Generally Accepted Accounting Principles (GAAP).

Over the past 15 years, users of private company financial statements have provided significant feedback to the FASB regarding the perceived usefulness of this standard, as well as the burden it often places on private companies, adding complexity and cost to financial reporting, often without an equal benefit.

The FASB had heard some of those concerns and issued an update to this standard in 2014 in the form of an Accounting Standards Update (ASU) 2014-07. This ASU allowed private companies with leasing arrangements with entities under common control to elect not to consolidate entities with whom they had common control leasing arrangements. This was beneficial for many companies that, for business and estate planning purposes, set up separate real estate entities from whom the operating entity would lease its facilities.

While ASU 2014-07 was a step in the right direction, it still left companies with the requirement to consolidate other related party VIEs under common control with whom they conducted other transactions. Even with this relief for common control leasing arrangements, private companies were left with financial reporting complexities that in the opinion of those companies and some users of their financial statements, still muddied the waters and provided information that was not always useful.

So, as a Halloween treat, the FASB released ASU 2018-17 on October 31, 2018. This update now gives private companies with VIEs under common control the option to make an election not to consolidate those entities, regardless of the types of transactions they conduct with those VIEs. So, rather than just applying this election to common control leasing arrangements, other related parties under common control with whom the reporting entity conducts transactions may now also be exempted from the consolidation requirement.

To understand the implications of ASU 2018-17, consider a hypothetical example. If Parent Company A owns 51 percent of Company B (reporting entity) and 51 percent of Company C, Parent Company A is still required to consolidate Companies B and C, as it owns a controlling interest in those companies. However, in this example, Company B (i.e., the reporting entity) may elect to apply the new alternative and not consolidate its VIE, Company C.

This new alternative may provide a welcome relief for many private companies that have borne the burden of (1) going through the exercise of determining what qualified as a VIE requiring consolidation, and (2) consolidating the reporting entity and its related party VIEs. The normal related party disclosures are still required, even if a company elects to adopt the alternative, but again, it could make financial reporting much more efficient and useful for private company owners, stakeholders and third-party users of those financial statements.

The effective date for this ASU essentially is for years beginning in 2021 and after. However, private companies and their affiliated entities that meet the above criteria can adopt this alternative treatment (which is still GAAP) early.

The benefits to private companies, and the users of their statements, of adopting this practice can be can be numerous. Notably, it can cut down on the expense of financial reporting, and create more useful financial statements that still comply with GAAP.

Do you have questions about related party guidance for VIEs, or other accounting challenges? Contact Jim Suttie, CPA, at 440-449-6800 or email Jim. 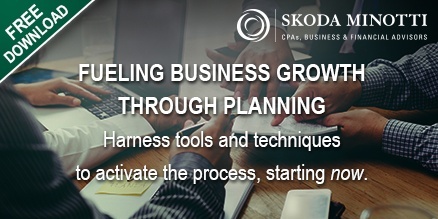 ← Moving From Chaos to Growth – Building the Right Processes

The Tech Sector Could Be Dominating Your Portfolio →