How Can Both Sides Win the Working Capital Debate?

Working capital is one of the most hotly negotiated areas in a potential transaction.  Furthermore, it frequently is the subject of post-transaction disputes and litigation. As the lifeblood of a business, working capital levels are in a constant state of flux. As a result, it can be very difficult to clearly define all of the specific working capital components that may impact the economics of a transaction. Whether you are a buyer or a seller, it is important to understand the impact of working capital on your transaction so that you can ensure you are getting a fair deal.

While most deals specifically define the components of working capital in the underlying deal documents, the most common starting point is to calculate working capital on a cash-free, debt-free basis and exclude income tax-related assets and liabilities, as reflected in the formula below:

Although the formula appears to be straightforward, there are countless ways each current asset and liability can be defined and interpreted in the context of a deal. In addition, buyers and sellers may have differing opinions about how working capital items should be treated for the purposes of the transaction. In order to avoid any surprises near or even after deal close, it is important that the parties understand the structure of the deal relative to working capital early on in the deal process.

The NWC Target is calculated based on a historical average (typically 12-24 months). However, the period used to set the NWC Target may differ from deal to deal depending on a number of factors. The following factors are commonly considered when setting the NWC Target:

A NWC Target can be a set number (“peg”) or a range (i.e., band). Similar to the NWC Target calculation considerations discussed above, there are a number of factors that will impact whether a peg or a range is used. The NWC Target serves as a protectant to both the buyer and the seller if there is significant shift in net working capital at close compared to the time at which the parties were negotiating the deal. The following examples illustrate the impact of a $400,000 to $600,000 NWC Target band:

In addition to the importance of setting a NWC Target, it is crucial for the buyer and seller to understand the period in which the deal will close. Because deals do not always close as of a fiscal year-end, the company’s month-end close process needs to be considered. Normally a month-end close process is not as involved as a year-end close. As such, the month-end financial statements may not be as reliable as a year-end set of financials (which may be reviewed or audited by an external CPA). Below are a few net working capital accounts that may need to be adjusted, along with related issues to watch out for:

The above accounts are the most commonly debated areas when negotiating net working capital in the context of a deal. In order to ensure a smooth deal process, it is important that both parties understand the key factors that ultimately drive the economics of the transaction.   Thorough due diligence procedures and agreement of both parties on each of the components is essential in navigating working capital as well as the overall transaction process.

Do you have questions about working capital or other transaction advisory-related matters? Please contact Ashley DeCress, CPA, CVA, at 440-449-6800 or adecress@skodaminotti.com. 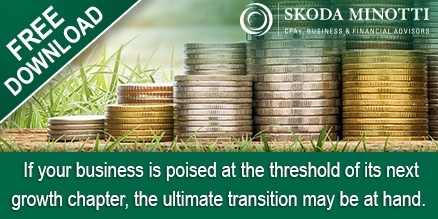 ← The Four Crucial Components of an Executive Dashboard

3 Reasons Why Manufacturers Should Go Mobile →