An Explanation of Discounts for Lack of Control and Marketability

Investors in publicly-traded companies have the luxury of knowing the value of their investment at virtually any time. An internet connection and a few clicks of a mouse are all its takes to get an up-to-date stock quote. Of all U.S. companies, however, less than 1% are publicly-traded, meaning that the vast majority of companies are privately-held. Investors in privately-held companies do not have such a readily available value for their ownership interests. How are values of privately-held businesses determined, then? Each month, this eight blog series will answer that question by examining a key component of how ownership interests in privately-held companies are valued. If you would like to download our full e-book, which includes all of the blogs in this series, you can do so here.

Discounts for Lack of Control and Lack of Marketability

Control – Whether or not the ownership interest being valued has control over the subject company can have a meaningful impact on its value. Controlling owners have the ability to:

The ownership of a non-controlling interest in a company does not have the ability to unilaterally direct the items above, which generally makes it less valuable than a controlling ownership interest.

The impact of lack of control on the value of an ownership interest is typically reflected in one of two ways:

It is not unusual in the valuation of a non-controlling ownership interest in a privately-held company for the resultant value to be 50%-80% of the value of the company on a controlling, fully-marketable basis. Therefore, the consideration of discounts for lack of control and lack of marketability are important in any valuation analysis, particularly those involving non-controlling ownership interests in privately-held companies.

For more information on the topics covered in this blog, contact Sean Saari at ssaari@skodaminotti.com or 440-449-6800. 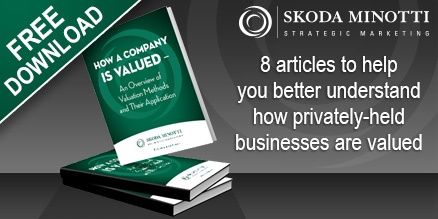 An Explanation of the Asset Approach to Valuation →