Respondents from Skoda Minotti’s 2016 Northeast Ohio Construction Industry Survey have ranked healthcare reform as the second-most important political issue affecting the construction industry, right behind material price volatility. In fact, healthcare has been chosen as one of the top three issues since the time the question has been included in 2009. As more and more employers are included under the mandates of the Affordable Care Act (ACA), healthcare costs continue to increase for the majority of construction firm.

In the six years following the passage of the ACA, the uninsured share of the construction workforce dropped from 35% to 25%. In 2014, the uninsured rate in construction reached a historically low level at 25.2%, but remained the highest among major industries. For the full story, read the article contained in the 2016 survey results, UPDATE: The Affordable Care Act.

The results from the 2016 Skoda Minotti survey – our ninth annual survey – reveal mixed news about opportunity and competition. While some issues, such as the shortage of skilled labor and healthcare reform, remain hot topics, some notable changes include:

In addition to the ACA update, the 2016 construction survey results also include an update on tangible property regulations and a ranking of this election year’s hottest topics.

Find out what your peers are saying about the state of your industry; click here to access the full survey report.

For more information about the survey from the Skoda Minotti Construction Industry Team, please contact Roger Gingerich at 440-449-680 or by emailing him at rgingerich@skodaminotti.com. 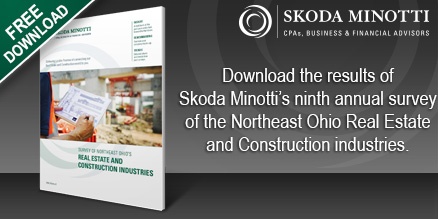